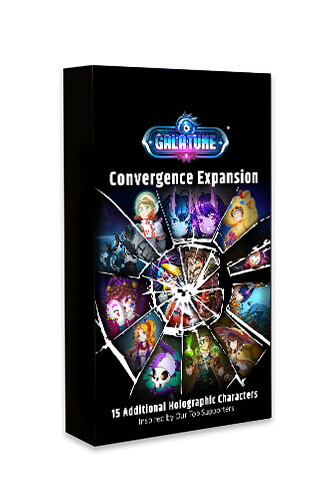 It's been an emotional journey that's brought us to this point. From my first card sketch 21 years ago when I was 10 years old, now to our 2nd character expansion!

Convergence brings together our top supporters and includes an awesome mix of fan-inspired characters and crossover characters, all beautifully illustrated and competitively balanced.

Thanks to everyone who has supported us along this journey, we're growing fast and honored to have an exciting set of special guest characters joining the roster, including: Beep & Boop of Florkofcows, Dave the Dolphin of Dolphin Hat Games and #TacoCatGoatCheesePizza, Lindsay of Ohayocon, Tekkobot of Tekko, Yorick of Wraith Games, and Andreaus of D20.

Our fan characters take inspiration from our real life fans, merging their likeness with our lore. For the first time, all of the fan characters in this set actually follow the same story arc, so enjoy learning more about our lore as you piece together the fan character backstories.

What's this? Thanks to Florkofcows, a special promo action card is included with this expansion! Inspired by his Tago Bell comic! "Charlie's Tago" is an odd life card that captures the forbidden treasure that is the tago.

Show your love for the amazing indie artists who illustrated this character set: Yamerpro, Pocketbee Draws, Penguin Attack Studios. Yamerpro's character Notre Valkyrie was featured in our Starter Deck, and now in this set we've got Luzz for Pocketbee and Samurai Pinku Pengu for Penguin Attack!

Save this product for later
Display prices in: USD